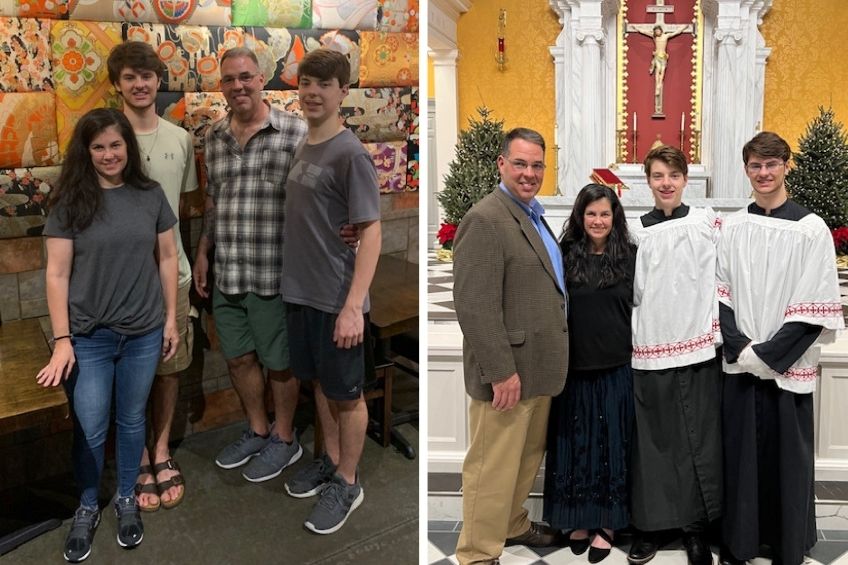 All different types of families come to the Well-Trained Mind Academy for their various educational needs. One reason homeschooling families seek out our help is to teach their students in one particular subject. This is exactly why the Anthony family came to WTMA in 2016. Mom, Donna, started Jack in Preparation for Expository Writing when he was in 6th grade. Now he is taking writing courses at the local university. His brother, Christien, is barreling through the writing classes and is about to start Rhetoric Writing I.

The Anthonys started their journey with us when Donna initially began to think about which writing program to use when their eldest son was entering middle school. However, without formal experience teaching writing, Donna began to feel overwhelmed by some of the curricula available to homeschooling families. Much of it seemed overly complicated to Donna, and she lacked confidence that she would be able to fairly assess the level of skill in the children’s writing as they progressed through the grades. A fortuitous Google search later, Donna called up the Well-Trained Mind Academy, and the rest was history.

Having already found a homeschooling curriculum that the family used and liked very much for other subjects, the Anthonys primarily came to the Academy for our writing program. Completely unfamiliar with either Susan Wise Bauer or Classical Education prior to joining the Academy, Donna says that those elements of our academy were not driving forces behind the decision to stick with us for so many years. For Donna, her primary concern was to find a program that would provide a solid writing foundation for the boys as they grew into mature writers.

Donna shares that Jack, her eldest, is currently taking ENGL 1102 as a dual-enrollment student with the University of Northern Georgia (and earning a solid A!) as an 11th grader, having started his writing instruction with us in sixth grade. Donna says, “I’m very happy with how Jack’s classes with you guys have prepared him for this college writing class. When he was younger, he had trouble with writing — it’s just not the way he thinks; he’s very computer-y and techie. And that’s what I wanted from your program — to help him be able to write in college.” Christien, the Anthony’s youngest, is likewise thriving in his writing classes with the Academy as he prepares to enter 10th grade this coming fall.

Take the Stress out of Homeschool Writing Instruction

Donna, a homeschooling parent very involved in her children’s day-to-day lessons and assignments, reflects on the change that came about after switching to using the Academy for the boys’ writing instruction. She says, “It was really nice that writing instruction was independent of me…I didn’t have to do anything with it. Of course, in the first years, I would make sure — I would read Jack’s things and follow his grades, but now it’s just something I don’t really have to worry about at all.” This change allowed Donna to remain an active administrator of her children’s education and continue to have careful oversight of her children’s assignments but freed her from the added pressure of having to teach them a subject for which she did not feel adequately prepared.

In addition to their experience in our writing classes, both sons also have taken advantage of our Summer Reading Clubs as a means of keeping themselves academically engaged during the summer months of the year. Donna laughed as she recalled Christien’s less-than-pleased reaction when learning that he had been signed up for a reading club during the summer, sharing that he was “not thrilled that I signed him up for those. He’s like, ‘Why’d you make me read in the summer!?’” Mom’s response? “Because you need to!” Mom, however, felt differently about the summer reading clubs, sharing, “I thought it was a great opportunity that we had to do, because they would be on the computer all day playing computer games [otherwise] – and you can’t do that!”

However, the experience must not have been too terrible for Christien, because even several years later, he was able to recall one of his favorite summer books, Hatchet, by Gary Paulsen, when asked if there were any that were particularly memorable. Though Donna didn’t have summer reading clubs in mind when she originally mapped out her homeschooling journey, the addition gave her peace of mind that her sons were keeping up their reading skills over the summer in a low-pressure setting.

We are incredibly proud of Jack and Christien and their progress in writing. Their mom came to us with a very specific need and set of requirements for her children’s education, and we were thrilled to sit down with her and learn just how well her boys are doing after having worked through so many of our writing courses. It has been such a joy to work with the Anthony family and watch them grow along with the Academy. We can’t wait to see the fantastic things both Jack and Christien will achieve in the coming years!