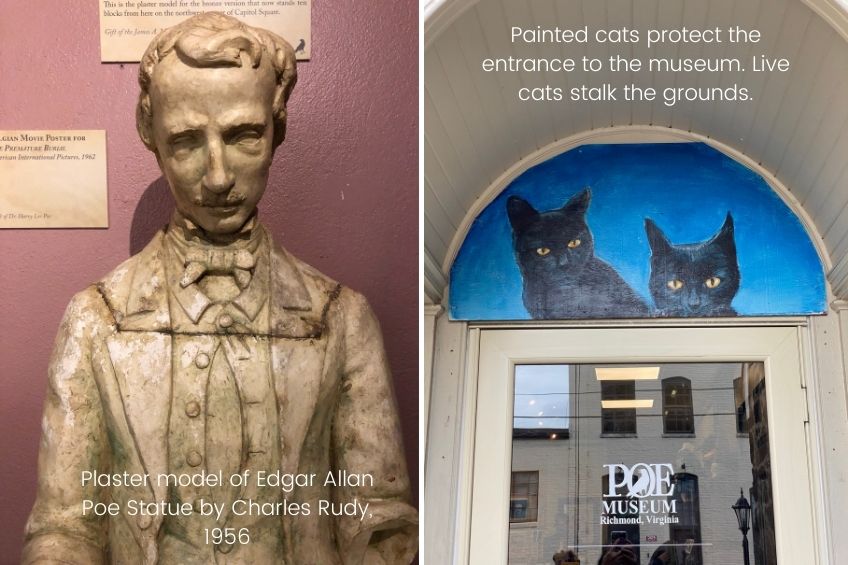 In celebration of Halloween, we are taking our readers on a short tour of two spooky places in Richmond, Virginia: The Poe Museum and Hollywood Cemetery.

The Poe Museum honors the macabre writer, Edgar Allen Poe. The museum was established in 1906 in the building that once housed Poe’s failed newspaper endeavor, the Southern Literary Messenger. When that building was later demolished, the museum was relocated to a nearby historic Richmond house. Bricks and granite from the Southern Literary Messenger building were used in constructing the lovely gardens that surround the grounds.

Any student who has completed Expository Writing I should be able to tell you, because of thorough study of Poe’s “The Bells,” that it was in this poem he coined the word “tintinabulation” to refer to the ringing sound that lingers after a bell has been struck.* Additional words from Poe that fit the spooky season’s greetings include “chillily,” “cadaverousness,” and “ghastily.”

Poe’s inventiveness may have come from his need to escape his dour domestic circumstances. Both his parents died when he was young. As a result, he was raised by John and Frances Allan in their Richmond, Virginia home, called “Moldavia.” Poe allegedly haunts the old house (as well as several other homes in at least five different cities).

Poe may be as famous for his mysterious death as he is for his writing. We spoke with Dean Knight, director of the Poe Museum, about the theories surrounding Poe’s death, of which many still remain. Some of the more interesting theories include vitamin deficiency, alcoholism, and cooping. Mr. Knight explained cooping as the practice by which illegal votes were garnered through the costuming of drunkards taken from the streets and presented to the polls as unique individuals several times to cast fraudulent votes.

We then visited the very beautiful Hollywood Cemetery. It is known as a garden cemetery, an outdoor museum, and a lush arboretum. It sits on the top of a hill overlooking the James River.

Of the famous men and women laid to rest in the cemetery, James Monroe, the fifth president of the United States, may be the most notable. His tomb is enshrined in a gothic-style canopy made of cast iron, often referred to as “The Birdcage.” It is a gorgeous spectacle to behold.

As we were admiring Monroe’s shrine, we met Jonathan, a groundskeeper at the cemetery. We asked him if anything spooky ever happened to him while working. He cheekily replied, “Not that I’m allowed to talk about.” We don’t really know if he was joking. Then he shared with us this wonderful photo he took that morning as he headed into work—a spider’s web woven into the gates of the cemetery with an old gothic house sitting quietly in the background. His composition perfectly sums up the cemetery: haunting and beautiful.

*Eagle-eyed readers will notice the spelling of tintinabulation here differs from the spelling in Writing with Skill I. For ease of reading, we kept with the spelling used at the Poe Museum.