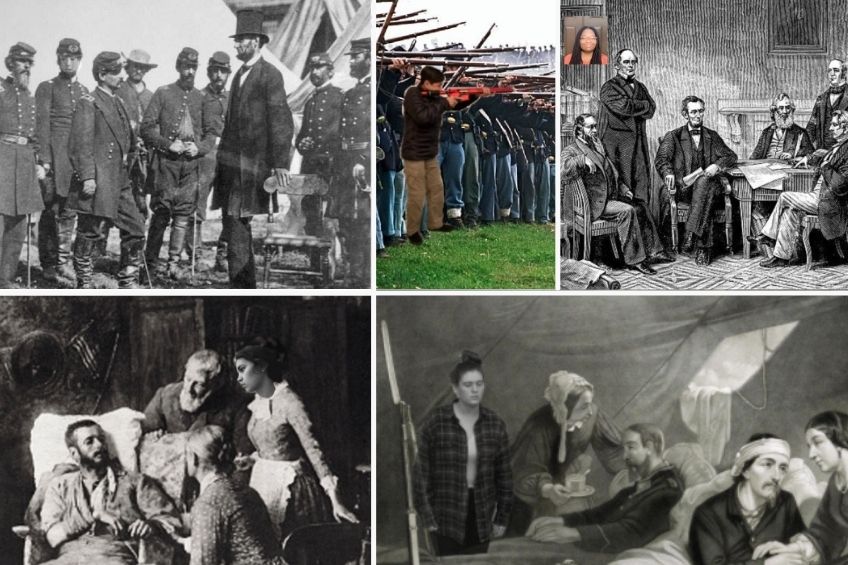 The Civil War was the first large-scale American conflict to be photographed. For the first time, the public could see soldiers in their camps, identify military leaders, view state-of-the-art weaponry, and witness the horrifying aftermath of battle. Our WTMA US History students imagined themselves traveling back in time into history through our Civil War Photobomb project. Each student selected an image from the Civil War (a photograph or a piece of art) and then inserted a photo of themselves into the image. After researching the event, they wrote an account of the event pictured from the viewpoint of an eyewitness. The responses showed such creativity!

Ronan Greaser as a Battle of Antietam Veteran

Ronan Greaser wrote from the perspective of a veteran of the Battle of Antietam. “On the other side of the battlefield, General Ambrose Burnside led over twelve thousand men to the Antietam creek, held by only four-hundred and fifty Rebels. Despite their numbers advantage, our forces took several hours to finally drive the rebels back from their lines. After this, we began to give chase to the Rebels. Unfortunately for us, Rebel reinforcements arrived and we were driven back to the bridge…”

Jennalie Hemphill wrote from the perspective of a Union nurse. “As for me, I was stationed with my older sister Jane at a hospital in New Jersey. We make the rounds every day changing old bandages, applying ointments, fetching clean water, and writing letters to soldiers’ friends and family, among a score of other things.”

Louisa Cliff’s character also worked in the field hospitals. “While nurses did the best they could to tend to every soldier, many were neglected or injured beyond recovery. In addition to critical injuries, many diseases such as pneumonia, typhoid, and malaria quickly spread throughout hospitals. Nurses were not trained to take the precautionary measures needed to slow the spread of disease and failed to wash their hands and adequately cleanse equipment. Many more soldiers died from disease than from the fighting itself.”

Naomi Solomon listened in as the Emancipation Proclamation was being proposed and also managed to be at the signing. “On July 22, 1862, I was tucked in the corner of the East Wing, virtually unseen by President Abraham Lincoln and his cabinet. I was unaware of just how transformative the words about to be spoken were….The man I assumed to be Chase appeared to be extremely supportive of the document, offering his immediate support and favor. Seward, on the other hand, was reluctant, stating that it would be best to hold off on going through with this plan until the Union had a major victory. Soon after, the meeting adjourned, and I was left in the room to my own thoughts.”

Kekoa Doyal as a Union Soldier

Kekoa Doyel joined the US Army troops in the Shenandoah campaigns. “On September 21 and 22, 1864, we marched across mountainous terrain to arrive at a mountain named Little North Mountain. Then we ran down the mountainside and were able to punch through the Confederate left flank. We were again able to defeat the Confederates, and their line collapsed into a chaotic retreat.”

Given the opportunity to travel back in time, students rose to the challenge. Not only did they master information about the Civil War, but they learned from one another’s engaging projects.