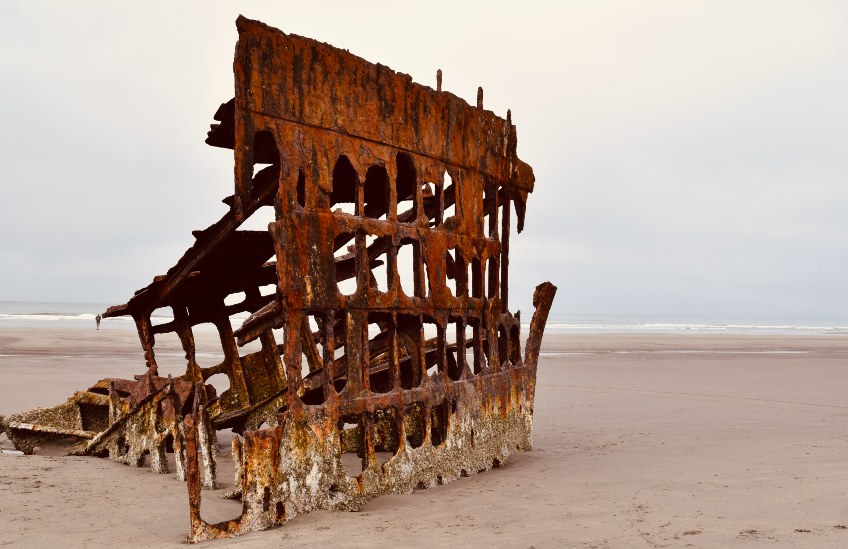 Masts snapped on impact. The mizzentop shot seaward. Shattered, slivered fragments battered with abandon. Having sailed safely northward from Salina Cruz, Mexico, along and beyond the California coastline, the twenty-seven crewman and two lonely stowaways aboard were now stock-still. As ever, appalling fog and heinous breakers, braced by vicious winds, were grim afflictions where the river meets the deep.

The Peter Iredale had struck the sands of Clatsop Beach. Where its cracked and rusted hull remains today.

Many of us will stay put this summer. Not unlike the Iredale, we’re caught in this seemingly-endless limbo between can we and can’t we, should we and shouldn’t we. Regardless of destination, it’s difficult to know how travel might affect the ever-shifting sands of public health. And, in truth, setting aside first-and-foremost concerns for collective wellness, I, for one, would rather see an end to masks than get a tan. But that doesn’t mean there aren’t amusements at hand.

When I think summer, I think: camp. When I think camp, I think: ghosts. Flashlights in cabins, held breath and fire crack. And, given that, I couldn’t help but wonder what it might look like to spend the sweltering weeks ahead spinning a few haunt-yarns and peril-tales. But ones that might, once we slip our present perils, encourage expedition and discovery.

Like, you know, a one-hundred-and-fifteen-year-old shipwreck on the coast of Oregon.

It’s known as the Graveyard of the Pacific, but its origins lie in British Columbia. Emerging from the Rocky Mountain Trench, cutting and curling its way across the border, shaping three-hundred-and-nine miles of border between Washington and Oregon, the Columbia River ultimately arrives at the Pacific Ocean, where it discharges at a rate of 265,000 cubic feet per second. And that vast discharge, in the end, sinks ships.

According to Oregon State Parks, since the late-eighteenth century, more than 2,000 ships have met their end at the Columbia’s mouth. Sand and silt deposits from the river’s onslaught tear through a slender channel and accumulate, layering and shaping the notorious navigational threat of the Columbia Bar. Stretching more than six miles, the bar is assisted by capricious swells and elements which pose such changeable risks that in 1898, forty-two short years after the construction of Cape Disappointment Lighthouse, the North Head Lighthouse was built just two miles from its predecessor for greater protection. Beacons, though, however thorough, can only do so much. And on the morning of October 25, 1906, Captain H. Lawrence and his men, like countless others before them, fell victim to the cemetery’s treachery.

With nearly three-thousand tons and three-hundred feet of wind-ship stranded, distress signals were sent. Rescue teams, manned with responders and soldiers from Point Adams, Fort Canby, and Fort Stevens, descended on the scene. But the story of the Peter Iredale isn’t one of lost sons and fathers or riches on the seafloor. No lives were lost. No injuries were sustained. Lifeboats arrived and evacuation was eventless. In fact, the captain’s wistful blessing and stoic salute are the only real hallmarks of what we might expect of seafaring catastrophe.

No, this isn’t a tale of grave adversity. It’s one about the natural world doing what it does and never letting go.

Sure, the standard inquests and salvage efforts ensued, but the departure of captain and crew left the wreckage to fend for itself. Year after year, assault and assail.  Searing winds and swelling tides sliced the hulking vessel without end. Although its bow reached skyward, the ship was trapped in an ever-tightening vice of sea and sand. A century came and went, generations rose and fell, but the Iredale remained.

And now, right now, there are people in its hull. They’re touching rust and cracks and scars. They’re taking photos on phones. Their feet are sinking into sand where once there were deckhands.

The Peter Iredale, all barnacle and iron, rests where it came to rest. Such are the binds of tides.

All of which is to say: there are many kinds of ghost. Some are bygone reminders. Others have scores to settle. Still others are made each and every day in ways we overlook. Beyond the skeletal remains of the Iredale, for example, the abominable bar that snared it, too, is haunted by the river that makes it. By the displacement of native peoples that occurred on its banks, by the nuclear contamination it barrels through, by its salmon that vanish.

So, while there will be more expected hauntings in the coming weeks, with a summer’s worth of uncertainty ahead of us, it may not be a terrible time to remind ourselves that catastrophes come and go, they rise and recede. But unless they’re told and told again with new perspectives, their tragedies tend to resurface, whether we want them to or not.

Assuming, that is, they ever sink at all.

For more information about the Peter Iredale or the Columbia River, check out:

And if you’re interested in this and other shipwrecks on the northwest coast, look for:

Thomas Hummel has been teaching at the Well-Trained Mind Academy since 2014. His writing has appeared widely in national and international journals, and his first book, Letters & Buildings, was published by Subito Press in 2014.