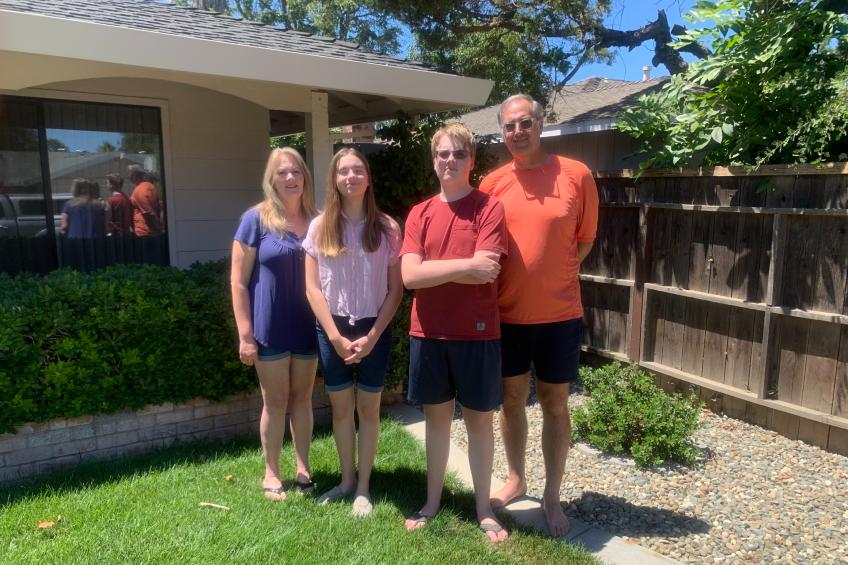 We love to watch students move through the Academy for their entire middle and high school careers. But this isn’t the only route to success families find with WTMA. Some families find that the Academy’s best function in their lives is to fill an educational gap for their students during a certain portion of their educational journey — such as only the middle school years or only the first and second years of high school. Today we sit down with Brenda Gervais to talk through her family’s decision to enroll their twins, Ethan and Ella, in the Academy throughout their middle school years in preparation for their admission to their local brick-and-mortar high school of choice.

The Unexpected Path to Homeschooling

Brenda homeschooled both of her children from the beginning of their education. Although she never considered the idea of being a homeschooling parent previously, the realization that her children were very young readers at the age of three sparked this possibility. When faced with the fact that the children were going to start learning whether she was teaching them or not, Brenda realized that it felt best for her to take the lead and officially began to consider the Gervaises a “homeschooling family.”

The twins’ elementary education occurred entirely at home, with each of the twins remaining at roughly the same points of progression throughout each grade. When the twins hit fifth grade, though, Brenda began to have concerns about continuing to homeschool them herself in certain areas, as each child was beginning to show aptitudes in distinct areas, and the schoolwork in general was growing more complex. Particularly, Brenda felt a bit out of her depth when faced with the possibility of educating her children in mathematics. She was also starting to feel less confident with evaluating their writing objectively. Parents frequently cite both of these concerns as reasons they turn to the Academy!

Brenda, a longtime user of the Well-Trained Mind Forums, learned about the Academy from conversations with friends she had made there. This was an important source of support for her, as Brenda says, “I was the only one that I knew who was homeschooling. I was dealing with a lot of the naysayers and doubters. So I just wanted reassurance from other parents about what was possible.” The homeschooling community on these forums gave Brenda the confidence that she had made the best choices for her children up to this point.

She also found self-assurance in her decision to enroll the children in Academy courses. As a secular homeschooler, Brenda found that the Academy and the Well-Trained Mind Forums together provided a “welcoming and open community” for her family. She goes on to say that she also appreciated the same quality about WTMA classes, as “they feel very respectful to everyone’s particular lifestyle.” It is important to Brenda that her children gain exposure to a range of perspectives in their education, and she welcomed these opportunities offered through WTMA courses. Another unforeseen perk of enrolling in the Academy, according to Brenda, was that, even though her family was in lockdown during much of the early days of COVID, there was virtually no disruption to her children’s life because their education was already entirely online.

Ella and Ethan have taken classes with the Academy since their sixth-grade year. When it comes to math, Ethan and Ella like to approach the subject using different conceptual modes, so it was useful for Brenda to be able to easily have Ethan take the Art of Problem Solving course in the math curriculum while Ella concurrently moved through the Saxon classes. Both students found that these specific approaches allowed them to learn best. Brenda noted increased competency and confidence in both of her children, despite her previous concerns that she would not have been a “good enough math teacher” herself.

More Than Math: Benefiting from Other Academy Courses

While math courses may have been a driving force in moving the twins to the Academy, the family found many other courses that suited them well throughout their middle school years, too. Both twins also took middle school history, writing, grammar, and reading classes. When Brenda asked the children which of the books from middle-school reading classes they wanted to keep as she was attempting to clean out their shelves, the response for over half of them was a hearty “keep!” as the children have plans to re-read some of their favorites.

Due to their twin status, Ella and Ethan often enrolled in the same classes. While they could have taken different sections of the courses at different times, Brenda preferred to enroll them in the same classes as a matter of convenience. Typically, the twins would take courses at the same time with the same instructor, but mom would try to keep the children in separate rooms and on separate computers during the class, which worked well to give each their own “individual” experience of the course. Ella, naturally thoughtful and friendly, flourished in classes as she found peers her own age who shared similar interests as she did all across the world. Ethan, a gregarious and quick-witted young man, likewise thrived as he entertained his classmates with hearty greetings to class and the occasional well-timed one-liner.

Transitioning from Homeschool to Brick-and-Mortar

Outside of their classwork, Ella and Ethan are quite active in Scouts. Prior to COVID, they both enjoyed swimming competitively. The twins are now preparing to enter their first year of high school at a local charter school, Classical Academy High School. They have been involved in making this decision to move to a brick-and-mortar school along with their parents, and everyone is feeling excited about the change, along with the occasional twinge of trepidation. Having never been enrolled at a traditional school, the twins aren’t sure what to expect.

However, they are excited about the additional in-person socialization and student club opportunities that attending this particular high school can provide. Having had such a solid education under Brenda’s early guidance and the educational support of WTMA during these past few years, we are confident that Ella and Ethan will thrive academically at Classical Academy High School. While we’d be lying if we said we aren’t sad to see Ethan and Ella leaving our classrooms, we are thrilled to learn how WTMA has served as a stepping stone to their family’s larger academic goals. We are excited about the new opportunities that await the Gervais family.