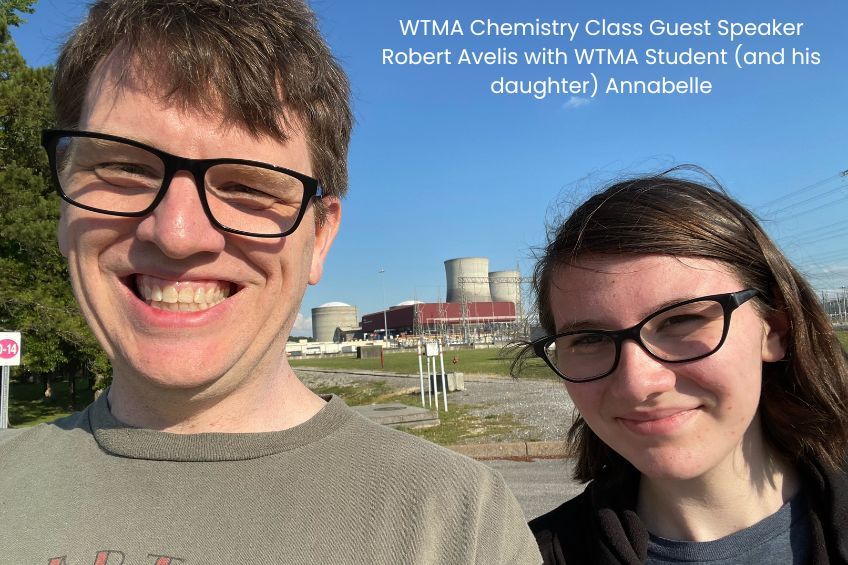 During the 2021-2022 school year, the high school Chemistry class at Well-Trained Mind Academy had the opportunity to interview Robert Avelis, an employee of a commercial nuclear power plant. Mr. Avelis, an Instructional Technologist at the Sequoyah Nuclear Power Plant in Tennessee, came to class to speak with our students. He is also a US Navy veteran who served on submarines after having completed the Navy Nuclear Propulsion Program, and he is the father of two WTMA students!

What follows are a few of the questions that our students asked Mr. Avelis during their interview. The information below is very technical, but interesting nonetheless! Questions and answers have been edited for brevity and clarity.

What are the nuclear rods at your plant made out of?

Each fuel assembly is constructed of rods that have a zirconium cladding that contains the uranium fuel pellets. The reactor at Sequoyah is made up of 193 fuel assemblies. Every 18 months, one-third of those assemblies are swapped out with new assemblies in order to keep the reactor continuing to produce power.

What types of safety system(s) does your nuclear power plant have?

Safety systems depend on the type of reactor. Sequoyah is a pressurized water reactor, while other power plants are boiling water reactors. Both reactor types in the United States have a mechanism to insert the control rods into the core to shut down the reactor. Other safety systems are designed to push borated water into the core to poison the reactor and shut down fission while also keeping the core covered. The biggest danger to any reactor is to uncover the core, which would cause a meltdown like Three Mile Island or Fukushima.

Is there any significant concentration of enriched fuel left over in waste?

There is uranium that is left over in what the industry calls “spent fuel” that could be reclaimed. This uranium is extracted in countries like France. But the US currently does not reclaim the good uranium from fuel assemblies. There is a concern for weapon proliferation from reclaimed uranium. A side reaction in nuclear reactors is that the uranium atom can absorb a neutron and not undergo fission which would create other transuranic elements like plutonium. Plutonium can be used for nuclear weapons. So there are some political concerns with uranium reclamation.

How much energy does a typical nuclear power plant produce compared to other forms of energy?

The Sequoyah plant can produce 1300 megawatts of electricity when on the grid. This is on par with coal plants. Natural Gas (combustion turbines) are smaller, but they are cheaper to build and less to maintain. Wind and Solar energy would require a large acreage to get comparable electricity generation as nuclear power plants.

How much energy does a typical nuclear power plant produce compared to other forms of energy?

Right now, the proportion of energy that is nuclear energy vs. other forms is actually going down. The US has plants that are shutting down due to market pressures. The biggest challenge of nuclear power plants right now is that though they are a source of carbon-free electricity, they are more expensive to operate than other generation sources.

If a reactor is shut down, how long does it take to come back to producing energy?

Once shut down, a large commercial reactor can not be turned back on right away. Whenever you have fission, other elements are formed, which eventually turn into xenon, which can absorb neutrons again. So even if we wanted to turn it on right away, we could not because this “poison” or other elements are sucking up the neutrons. Also, the plant staff must examine why the plant shut down in the first place and take corrective action to fix the problem. This means that it can take a couple of days to start a reactor back up. Additionally, it takes hours to raise reactor power from zero up to 100%.

Is a nuclear reactor constantly functioning at a controlled rate unless it must be shut down for safety reasons?

Our goal in the nuclear industry is to not shut down until planned maintenance and refueling outages. At Sequoyah, this occurs about every 500 days per unit, allowing us to work on things that cannot be performed while the reactor is operating.

What is the temperature that typical reactors operate at?

The usual temperature for a pressurized water reactor is around 500 degrees Fahrenheit. Boiling water reactors are lower because they do not operate at the same pressure.

Can you control how much energy the plant produces, adjusting to demand on the grid?

Nuclear power plants are baseload plants. Since it is hard to move power, we want to go up in power and stay there. Other power plants in the grid will take care of fluctuations in power.

We learned so much about nuclear power plants during our interview. We would like to thank Mr. Avelis for taking the time to speak with our students!