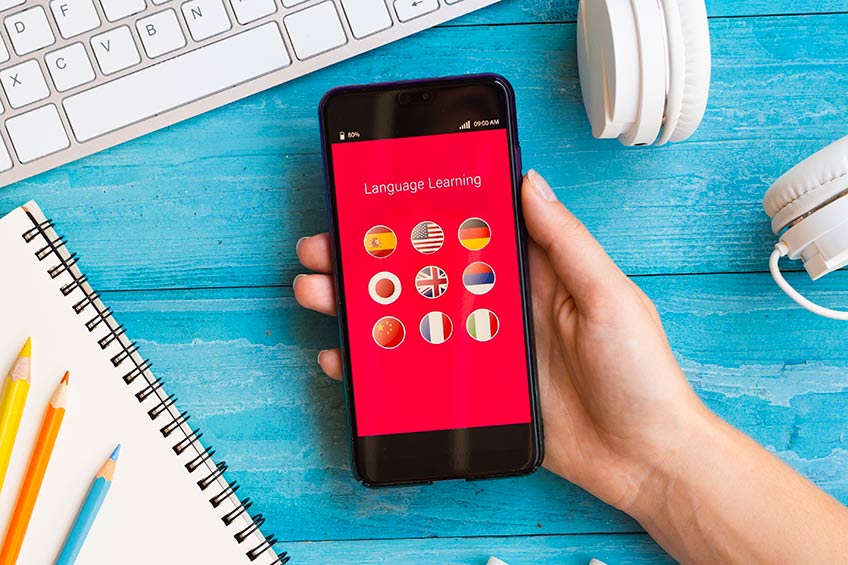 I’m Clare Kappenman, and I teach Japanese at The Well-Trained Mind Academy. Before beginning to teach here, I taught privately for several years. Until then, I had been working as a translator/interpreter in Japan. In fact, this year marks a milestone: I’ve officially devoted half my life to the Japanese language!

When I tell people that I am fluent in Japanese, I often hear responses like, “Wow, I could never do that–I have no talent for languages,” or, “I hated Spanish in high school. I guess I should have started earlier if I wanted to get good at it.” But, even though these are very common ideas, I believe they are myths. If you are interested in having your child learn a second language, or in learning one yourself, it is never too late to start!

My mother started me in a weekly German class with other homeschoolers when I was six years old, and I continued until age 12. I learned to count, sing songs, and chant verb conjugations that I can still rattle off from memory. (Ich bin, du bist, er ist, wir sind, ihr seid, sie sind!) Over the years, when left to my own devices, I sometimes messed around with our giant blue-and-yellow Langenscheidt dictionary, trying to make up little sentences out of the words I found in its pages. But, although we were memorizing poetry in class and I could name the seasons in German, I had zero grasp of the grammatical concepts needed to make a sentence.

My German exploration came to an end when I began 7th grade — my first experience at a brick-and-mortar school since kindergarten. At lunchtime, someone challenged me to say, “Today I am wearing a pink sweater and blue pants” in German. I froze. I knew how to start: “Heute ich…” What came next? Was there a difference between “wear” and “am wearing?” I couldn’t think of how to do that. And did the colors come before or after the sweater and pants? I stumbled through something that may have been some kind of German, but it was obvious that this emperor had no clothes, rosa or blau or otherwise. The girl quirked an eyebrow and stated, in the brutal manner of middle school girls everywhere, the simple truth: “It doesn’t sound like you can speak German.”

Ouch. I quit German class not long after that. But my language learning didn’t end there! I started studying Japanese in high school, was much more successful, and wound up making a career out of it — which is why you’re hearing from me right now.

Somewhere along the line, all educationally-involved parents will hear that when it comes to world languages, “the earlier the better.” As we relentlessly compare ourselves and our kids to our peers and their kids, we can’t help but wonder if we’re dropping the ball. Shouldn’t Frankie be learning Spanish already? His friend Brayden can count all the way to ten. Didn’t I hear somewhere that after age 5/9/14 it’s too late and you’ll never be fluent?

This “fact” that floats around in the educational atmosphere is based on a theory called “the critical period,” and there’s a good argument to be made that we’ve taken it out of its proper context. There probably is a critical period — for learning a first language. Studies on feral children, and children who have been removed from abusive situations, suggest that a child who has had little to no linguistic input by age five or so may never develop language.

In one highly-publicized case, a thirteen-year-old rescued from an abusive environment managed to successfully acquire enough vocabulary to talk about herself — but only word-by-word. She could not form sentences. (Content warning: Linked article discusses child abuse.) For obvious ethical reasons, it’s impossible to test any hypotheses regarding the critical period under lab conditions. In any case, even if the critical period exists for first-language development, it’s a leap of logic to assume that the rules governing first-language acquisition must govern second-language acquisition as well.

Learning a Second Language is a Skill

One alternative to the critical-period hypothesis is one we might call the “time spent” hypothesis. This theory holds that second languages are more like piano, ballet, arithmetic, or chess — what we call skills. People who learn these skills young tend to be good at them because they’ve spent more time practicing them. Malcolm Gladwell wrote a whole book about it. While it’s not impossible to take up piano at 12, 25, or 60, life often gets in the way of the time we need to practice. So, as long as you can dedicate enough time for practice, you can certainly learn a new skill when you are older.

In my experience, world languages seem to fit best into the category of skills.  This also explains why full immersion in a country where the language is spoken is known to be the quickest way to master a second language. You can’t really practice more than twenty-four hours a day!

It’s Never Too Late to Start

So here are my recommendations. If your child is in high school and has never studied a foreign language before, don’t worry! It’s truly never too late to get started. However, if fluency is your student’s goal, she may need to sacrifice other activities in order to free up time for daily practice. (For example, my own study of the violin fell by the wayside when Japanese entered the schedule in ninth grade.)

If you don’t speak a second language yourself, the best way to prepare your students for future success is to give them a thorough foundation in English grammar. When they take a language course, the teacher will use words like “subject,” “predicate,” “direct object,” “adjective,” and more. Students who aren’t familiar with these words may find themselves struggling in the course. The middle school years are an ideal time to polish up those grammar concepts. Also, consider trying a simple introductory language text together; my kids and I enjoyed Getting Started With Latin. The same author has published similar introductions to Spanish and French. The Logic Stage years are great for “learning with your child,” so if you’ve always wanted to pick up a second language, now’s the time!

With little ones? It’s not a bad thing to hire a teacher, but bear in mind that unless your child has daily exposure to the language, he probably won’t build up the neurological hardware to form original sentences (expressing his own thoughts, with no hints or help) for years. It doesn’t mean the lessons aren’t working! It just means your child hasn’t reached the right developmental stage yet. If you can’t afford lessons, you can still listen to songs in Spanish, learn to count in French, borrow a book about Chinese characters from the library, etc.… have fun with it! Your kids will be learning more about the world, and they’ll feel so accomplished. And if music, art, history, sports, or something else knocks world languages off the schedule, well, rest easy. You aren’t missing the critical period.